The HR Capitalist recently published a great list of productivity killers, which included the usual suspects such as Facebook and drinking.

According to HRC the biggest enemy of productivity is fear of confrontation, which I completely agree with for different reasons. I don't think fear of confrontation is driven by a desire not to hurt someone's feelings, I think it's primarily fueled by fear of repercussions.

In other words, if your manager, colleagues and/or company culture are not open to constructive feedback, it's safer to keep your mouth shut. 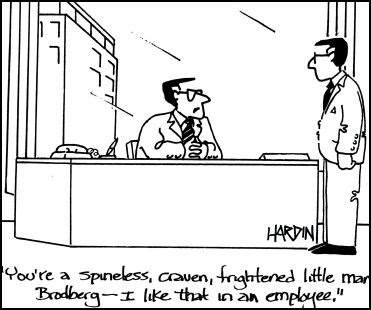 Or, to get back to the productivity question, it might just be more efficient - for you - not to get embroiled in a pointless argument.

Interestingly, all people in an organization, independent of gender or education level, are equally likely to withhold the truth.

According to a recent survey from Cornell cited over at HBR, '...there are no statistical differences...between those of different income level, education level, or gender in the likelihood of holding back due to fear or a sense of futility.'

And the result? Spiritless people agree to mediocre solutions while secretly planning their vacations and hoping someone else will speak out and liven up an otherwise boring meeting with a bit of Schadenfreude.

I'm not saying it's bad if people agree. In fact, genuine agreement tends to boost productivity because everyone's headed in the same direction.

But is it really agreement or are people just unwilling to speak up?

Watch the eyebrows - eyes sometimes lie, eyebrows never do.
at 4:33 AM