Social networking or stand up?

In the early days I assumed that social applications like Facebook and Twitter were all about networking because, well, that's what everyone said. But then I got confused because there didn't seem to be all that much networking going on.

For example, after first reconnecting with school friends and catching up for all of five minutes, most of my Facebook relationships involved my 'friends' letting me know what movie or flower they are at all hours of the day and night. Not that this is completely uninteresting but it feels less relationship forming than an actual conversation or shared experience.

Mind you, it's not all one-sided. If I so choose I can also publish which Spice Girl I most resemble or announce to my network that I am watching 'Pimp My Ride.' It's also a good way to stay informed of the latest Youtubes or breaking news. And Facebook makes it easy to contact someone with a quick question or update, or write on someone's wall to express sorrow that their dog died (which is way more convenient than writing a card or calling), as well as stay in touch with people I don't see very often, all of which qualifies as networking.

But primarily people seem to use Facebook to create a virtual persona that is just a little cooler, wittier, happier and more glamorous than the real person. It's not about interaction, it's about advertisement. It's less about connecting and more about being connected. 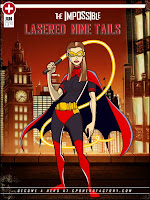 Basically, it's not about us, it's about me. That's right, me, Captain Nine Tails, superhero, at your service. No time for a real conversation but I'll occassionally poke or 'like' one of your comments to show I haven't forgotten how close we are.

And the sarcastic shall inherit the Internet.

There are no interruptions in this virtual space, no need to listen politely to what someone else is saying while secretly thinking about your next comment, just the blessed quiet of the Internet that lets you to hide behind your gorgeous profile picture in tatty old pajamas and take as much time as you need to come up with a witty or jealousy invoking status.

Of course, with companies increasingly jumping onto the social networking bandwagon, the trick is to come up with comments that will make your friends laugh without alienating the colleagues and business associates that are also connected to you.

It's a fine line.

It's the best of both worlds. We never have to be alone again but we also don't have to deal with actual people.

So, it's clear why Facebook holds a certain appeal.

Twitter allows us to take our self-absorption a step further with real time updates of every thought that enters our heads, every cool thing we read and every fro yo stand we visit. Of course, we don't call it self-absorbtion, we call it 'personal branding.'

We count our followers the way 2nd graders count their Valentine's Day Cards.

It's brilliant really, scratching an itch most of us didn't even know we had. I mean, who could have guessed that each of us a deep, irresitable need to tell people that a carrot in our garden looks just like Einstein?

Well, OK, if you put it that way it's obvious.

Gone are the days when you would think of a great one-liner in the shower and not have anyone to say it to. . . (I see a huge market for shower Twitter, by the way, waterproof units installed right into the tile in case you have a thought worth sharing while shaving your legs, so you can 'shweep' to your 'tweeps'.)

Back then you'd have to remember your dazzling comment for days, maybe weeks, until you could finally contrive a situation to use it and try to make it sound spontaneous. And sometimes you forgot it altogether and the world lost a brilliant commentary gem.

But that's only half the story, and not the most interesting half. Twitter is also emerging as an informational platform for a worldwide collective intelligence, where the latest trends and ideas can be posted to a group of interested parties. It is a viable platform for applying political and social pressure. Opinions are shared and formed. Tipping points are reached. Communication is exponentially faster and necessarily more shallow.

The collective plugs in, absorbs data and subtly changes its nature.

I sometimes wonder where this sound byte-oriented, realtime communication will take us as a society. I wonder if when my children grow up they will be capable of having a face-to-face conversation with actual eye contact or if that will already be an outmoded concept. Perhaps it will cease to matter who people are as long as they have a cool avatar. Maybe over time people will cease to live in the real world altogether, preferring a cerebral existence that makes no ethical demands.

Then again, it could also be that the vast growing social network will become an important tool of human evolution, making us wiser, more tolerant, more informed, more connected to one another.

What do you think?