I recently watched a fascinating Ted Talk by Matt Ridley on how ideas can team up to create complicated systems that no one actually understands but still work.

The point is that combined ideas allow us to do extremely tricky things that none of us would be able to do - let alone understand - on our own.

Scott Adams said something similar years ago in his groundbreaking book 'The Dilbert Principal':

"Once we had printing presses, we were pretty much doomed. Because then, every time a new smart deviant came up with a good idea, it would get written down and shared. Every good idea could be built upon. Civilization exploded. Technology was born. The complexity of life increased geometrically. Everything got bigger and better. Except our brains."

Now consider the advantages of teamwork, which has been a pretty hot topic lately. Some have even suggested that team skills are more important than other sorts of competencies, and at first glance the following example seems to support this.

Let's say you have two guys, Adam and Oz, who make their own weapons. Oz is a top performer, while Adam's a bit of a procrastinator. Nonetheless, if they agree to specialize and work together both of them save an hour. 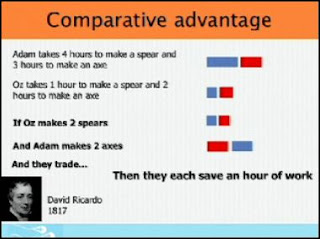 Wow. It really does look like teamwork is more important than talent when it comes to productivity, doesn't it? Even the top performer Oz, who is pretty self-sufficient and doesn't actually need Adam, clearly benefits from teaming up with a poor performer.

But what if both Adam and Oz are poor performers who each need two hours to make a spear or an axe? There wouldn't be much point in teaming up in that case, since no time would be saved.

Obviously as systems become more complex even Oz can't do it all and will have to rely on others unless he wants to dress in skins and live in a cave. Nonetheless, in this simple example, it is the fact that Oz is more productive than Adam that makes teaming up worthwhile for both of them.

Now, maybe Adam's a great guy and Oz is a total jerk. Fine. I'll drink a beer with Adam but Oz is the guy I want to buy spears from.

And another thing: Unless Oz is completely unbearable or in direct competition with me for a promotion or reward, if I'm on a high-profile spear making project with a big pay off I'd rather work with get-it-done Oz than friendly-but-slow Adam

So, when it comes to the current debate about whether teamwork or talent is more imporant, we may be asking the wrong question because they're both important. Without teamwork, talent is limited to the abilities of an individual, which can never match the collective abilities of a well-functioning team. Plus, unless survival's at stake, the benefits of increased productivity probably aren't worth the daily irritation of working with someone who lacks social skills.

But if you get rid of Oz because he's not a team player, that leaves you with Adam, who is less productive than Oz. Of course, you can bring in someone to replace Oz but unless they are also more productive than Adam the net result will be a drop in productivity.

In other words - as important as teamwork is - if you don't also nurture talent, teamwork and a dollar will buy you a cup of coffee.